View from Cotopaxi, above cloud level.
Panorama shot with a Olympus E520 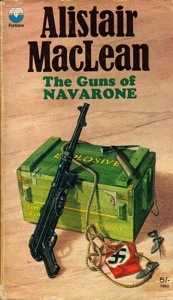 Cotopaxi, which means "neck of the moon", is a active stratovolcano in Ecuador. When I was thirteen or so, I read Alistair MacLean’s The Guns of Navarone. In it, Keith Mallory, the crack-climber-turned-leader of a commando invasion of the island of Navarone, remembers fragments of a poem that mentions Cotopaxi.

Well, one thing lead to another, and ten years later, I decided to climb Cotopaxi.

When I was but thirteen or so
I went into a golden land,
Chimborazo, Cotopaxi,
Took me by the hand.

My father died, my brother too,
They passed like fleeting dreams,
I stood where Popocatapetl
In the sunlight gleams.

I dimly heard the master's voice
And boys' far-off at play,
Chimborazo, Cotopaxi
Had stolen me away.

I walked in a great golden dream
To and fro from school -
Shining Popocatapetl
The dusty streets did rule.

I walked home with a gold dark boy
And never a word I'd say
Chimborazo, Cotopaxi
Had taken my speech away:

I gazed entranced upon his face
Fairer than any flower -
O shining Popocatapetl
It was thy magic hour:

The houses, people, traffic seemed
Thin, fading dreams by day,
Chimborazo, Cotopaxi
They had stolen my soul away.

The thermal springs town of Baños spreads out in a valley beneath an active volcano called Tungurahua, shown erupting in this dramatic if uninformative map. In October 1999, Baños was evacuated when Tungurahua threatened to erupt once more. 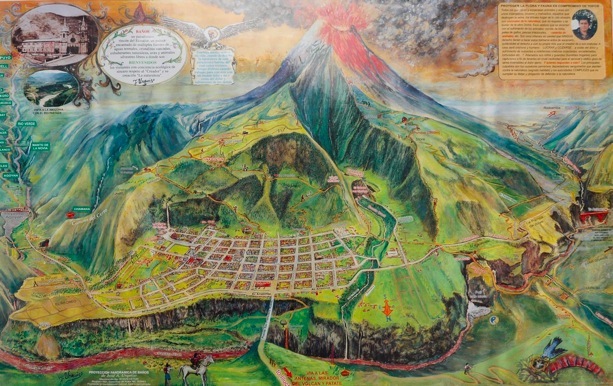 Baños is a beautiful city, with hiking and biking trails, and a generally easy-going disposition. The sun shines benevolently on this little town, till at least the volcano kills everyone in it. 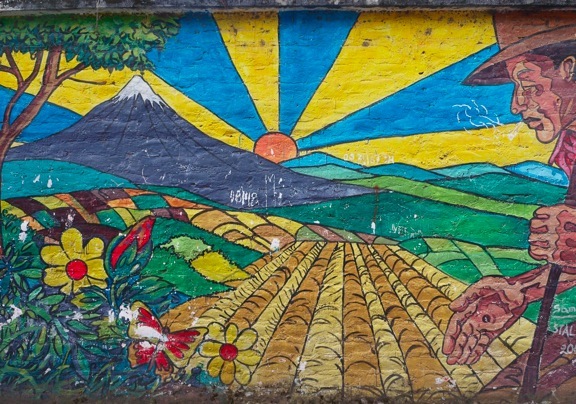 Tungurahua is a dangerous neighbour to have, and he belched smoke and ash throughout our stay there. 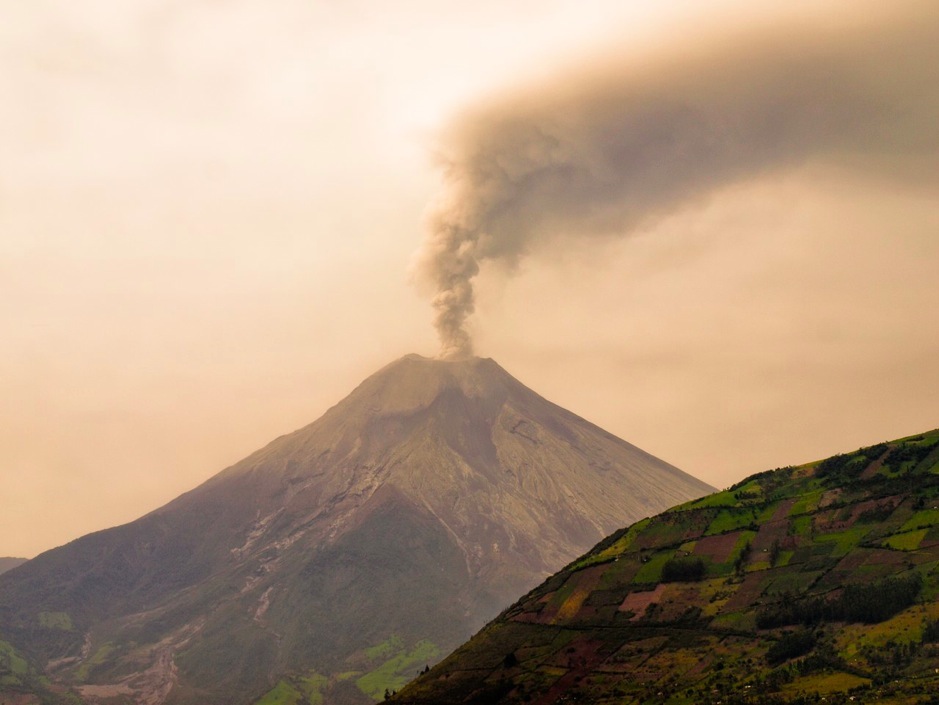 When the amateur adventurer attempts to climb Cotopaxi, he is reminded that it’s a little high up, and a little acclimatisation to the altitude goes a long way. Keeping this in mind, we decided to cross the wind-swept landscape and climb some smaller peaks. 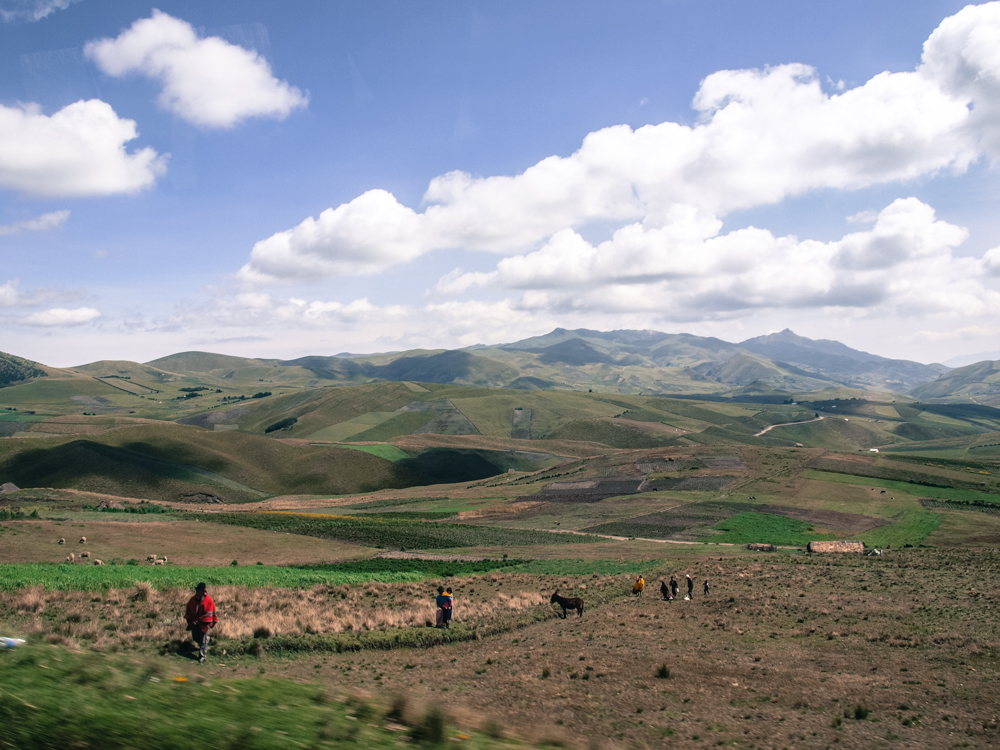 The first peak on the list was the ancient, extinct volcano of Pasochoa. It offered spectacular views all around, and Cotopaxi loomed broodingly in the distance: 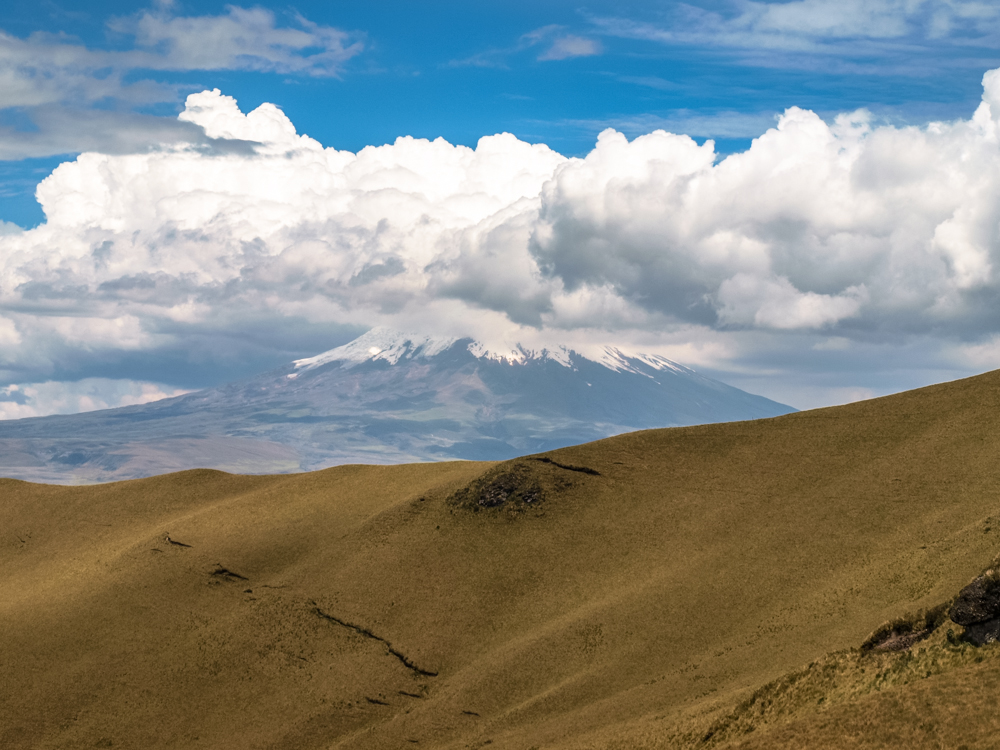 According to Wikipedia, the former volcanic fury of mighty Pasochoa has long since been quenched, and the only remnants of its awesome power is in the incredible fertility of its soil. 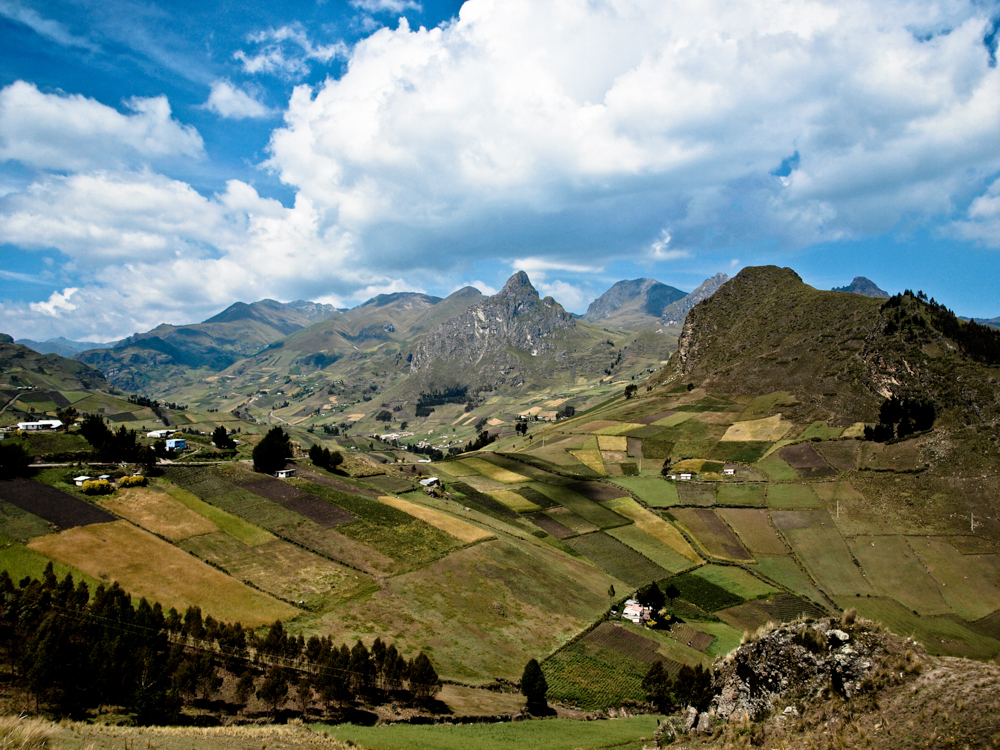 Next on the list was Quilotoa, another volcano past its prime, but also suffering from a leaky faucet. Its large caldera, once the flinger of massive lava bombs, is now a glorified wash basin: 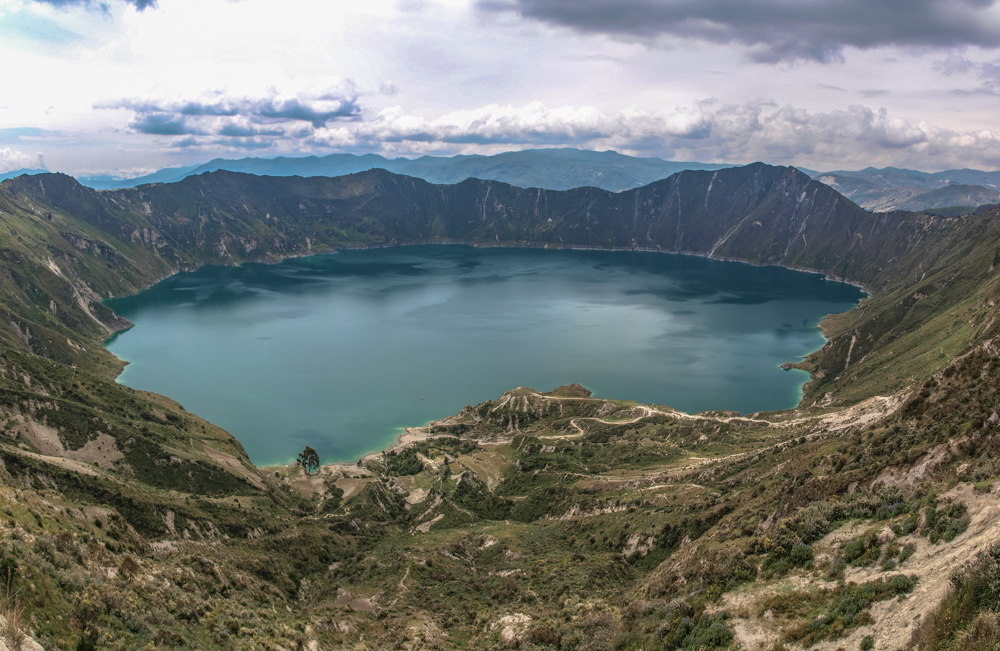 ...which came in handy, as the climb down to the lake in the middle of the caldera was incredibly dusty: 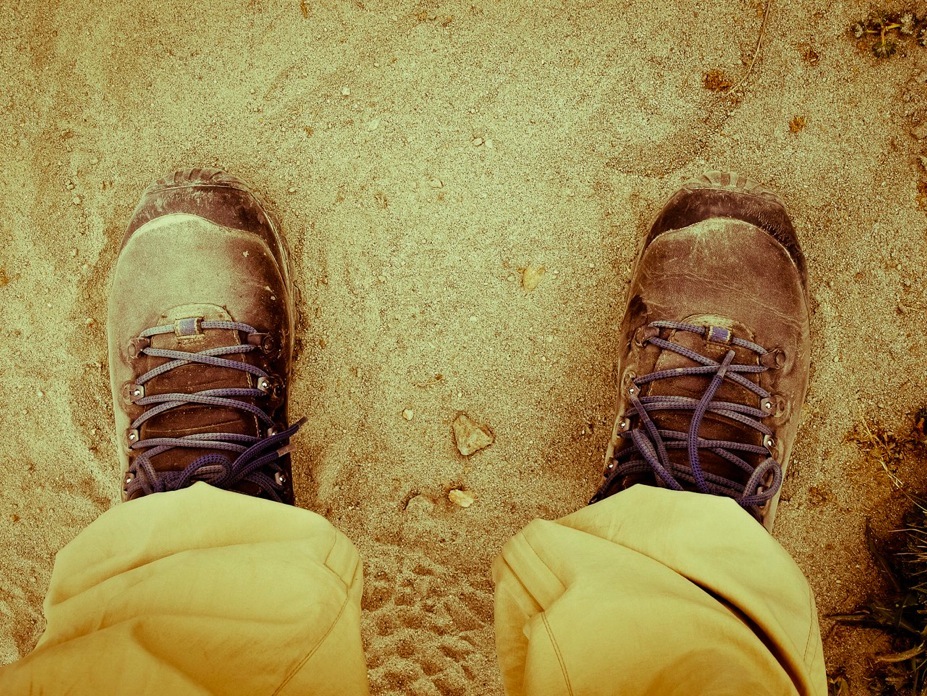 We are ready. We have conquered some dead volcanoes, and are ready for the real thing: Cotopaxi, in all its fiery glory; Cotopaxi, the active volcano, that could theoretically blow up and kill us all any minute; Cotopaxi, snow-shrouded, storm-veiled strato-peak, how you take my heart away!

Satellite imagery showing Cotopaxi. The town on the left is Latacunga.

We climbed Cotopaxi with an Alpine start, which is a fancy way of saying that we woke up at midnight and started climbing the mountain in complete darkness. Which is why I have no pictures here. Also, there were sixty kilometre-an-hour winds and it was freezing cold. I saw some snow, and some ice. But it was mostly blundering up the mountain in the dark, wondering if I needed to get my head examined.

Finally, after many tortuous hours, the sun arose, and I saw some fantastic ice and snow formations: 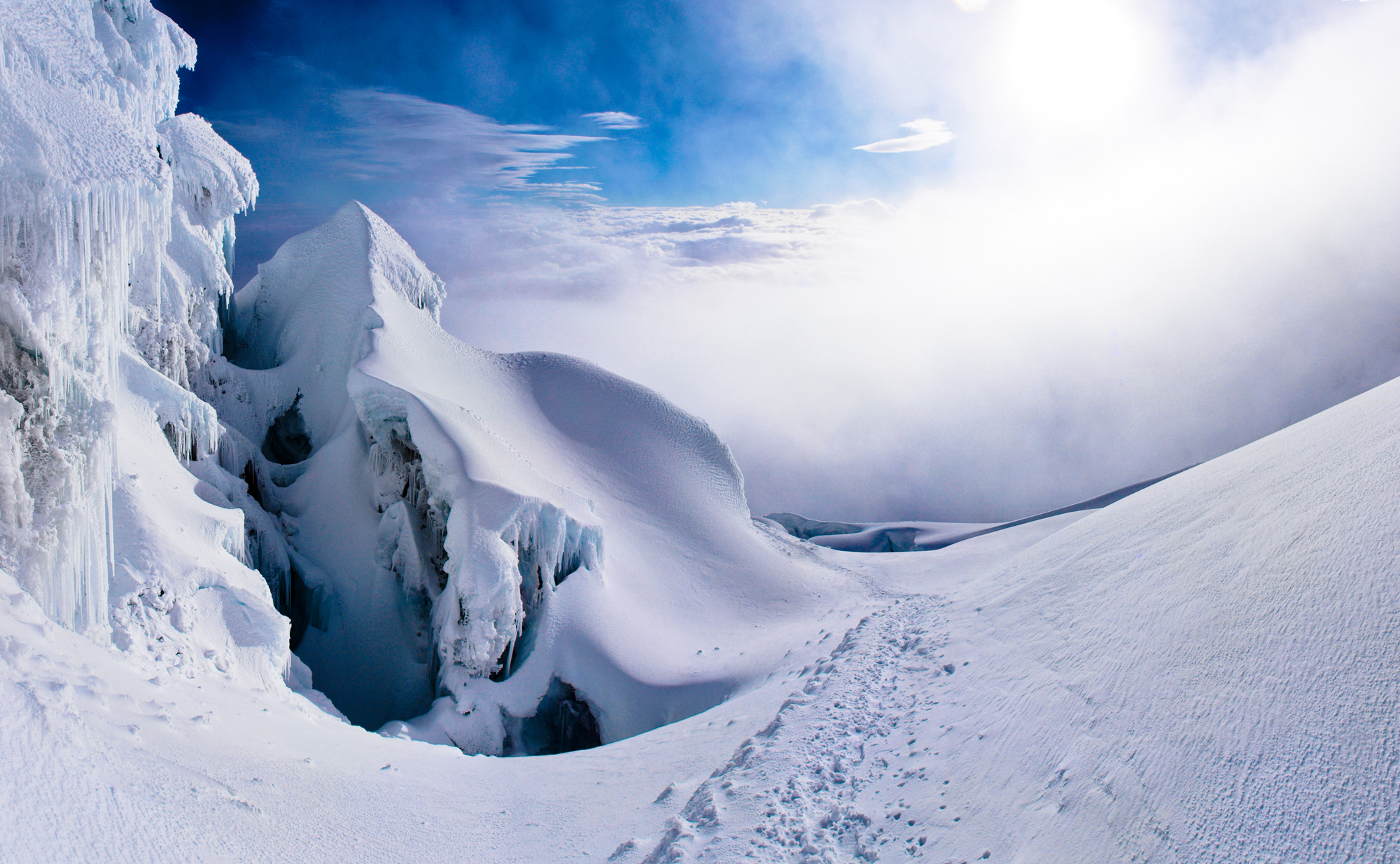 There was ice in all forms, sometimes in spectacular walls like this: 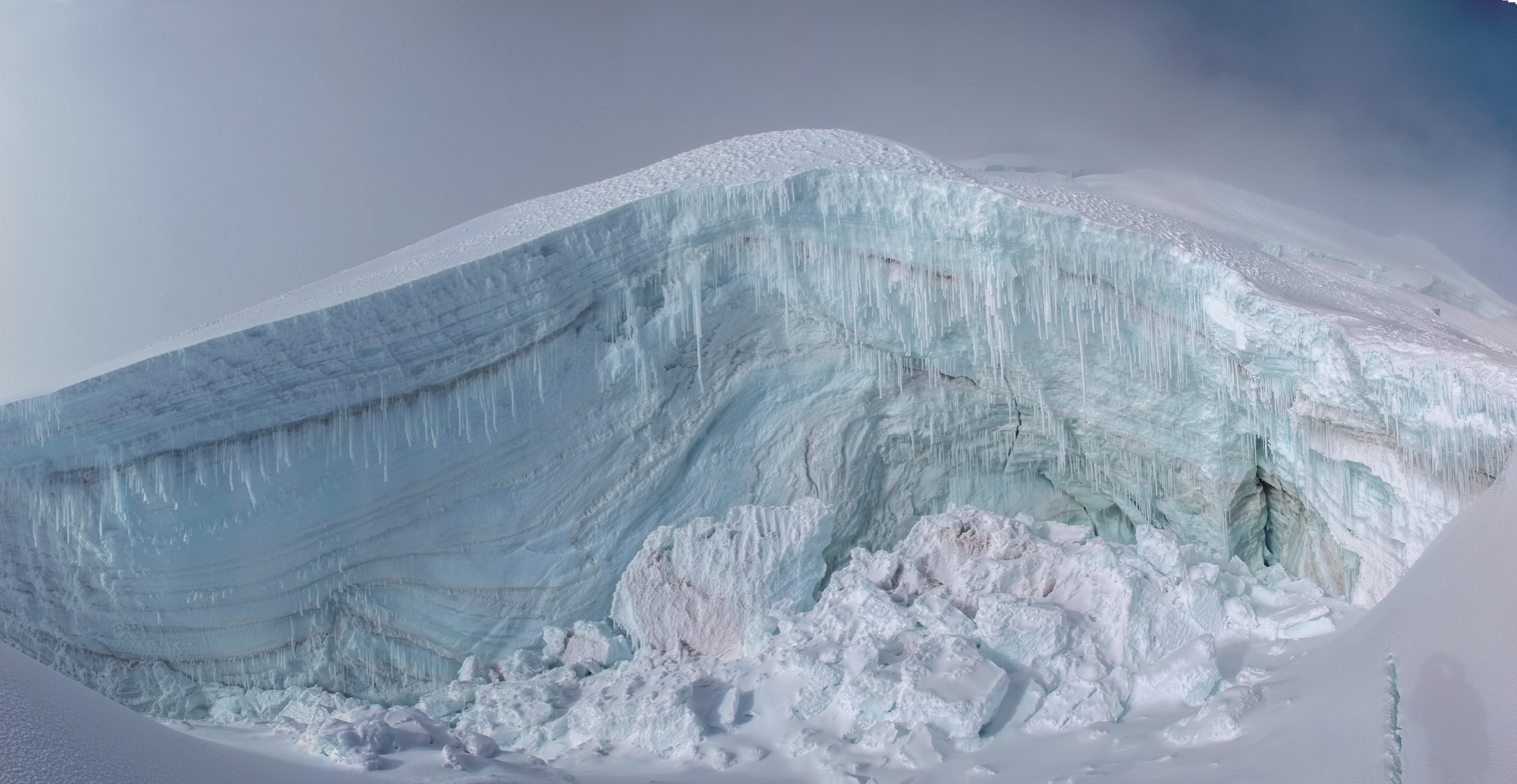 Ice wall with icicles. You can see my shadow on the right as I take the picture.
Olympus E 520