Satellite imagery showing old and new Delhi. The differences are quite striking.

There is a new Delhi, with wide roads and magnificent monuments, build in a vague yet somewhat imposing Indo-Saracenic Style. Then there is the old Delhi, with its dense streets and barely controlled chaos, with the restless din of a million lives living in proximity.

The two Delhis are sometimes barely separated, yet they appear as though from differnet eras. In the New Delhi, white Ambassadors trundle down the avenues towards the Secretariat Building, some with red light signifying the importance of their corpulent cargo. 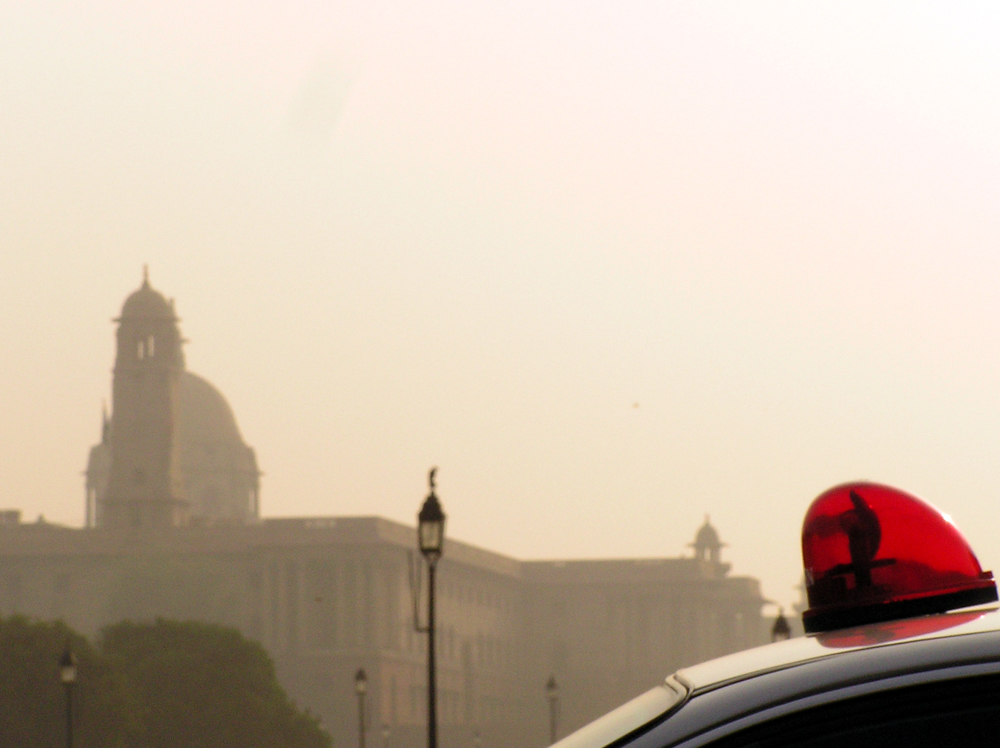 There is a grand majesty in the New Delhi, for this was to be imperial capital. The perfect circle of Connaught Place, where perhaps Russell imagined fine ladies promenaded down the endless corridors. 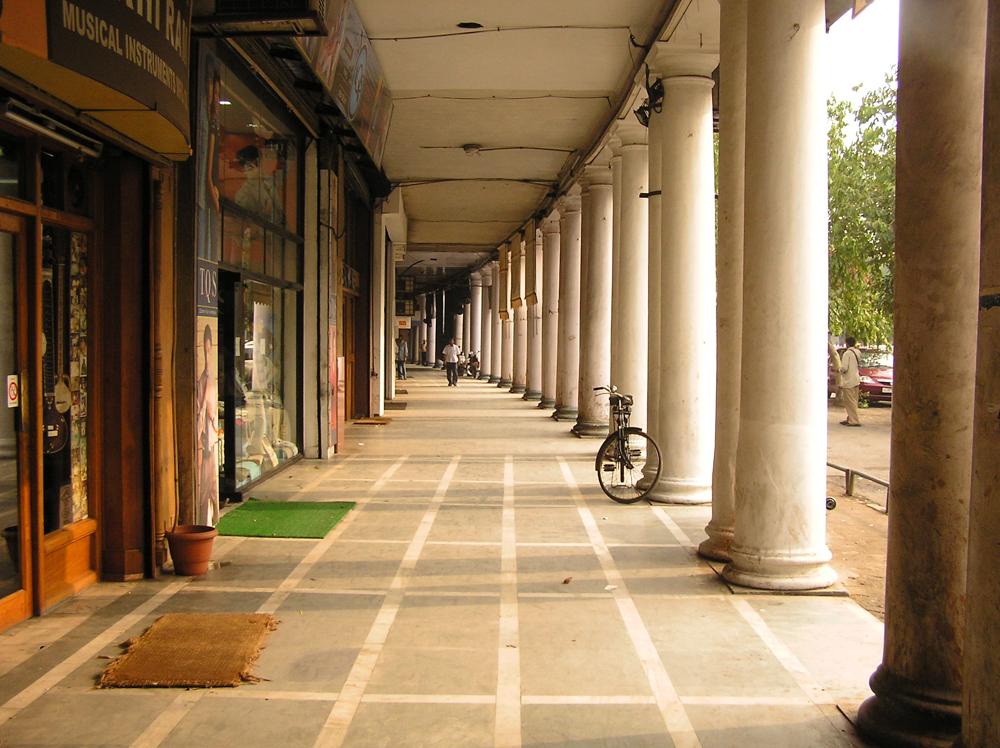 No matter where you go, you'll always see the cold-water guy, peddling his deadly typhoid-laced water: 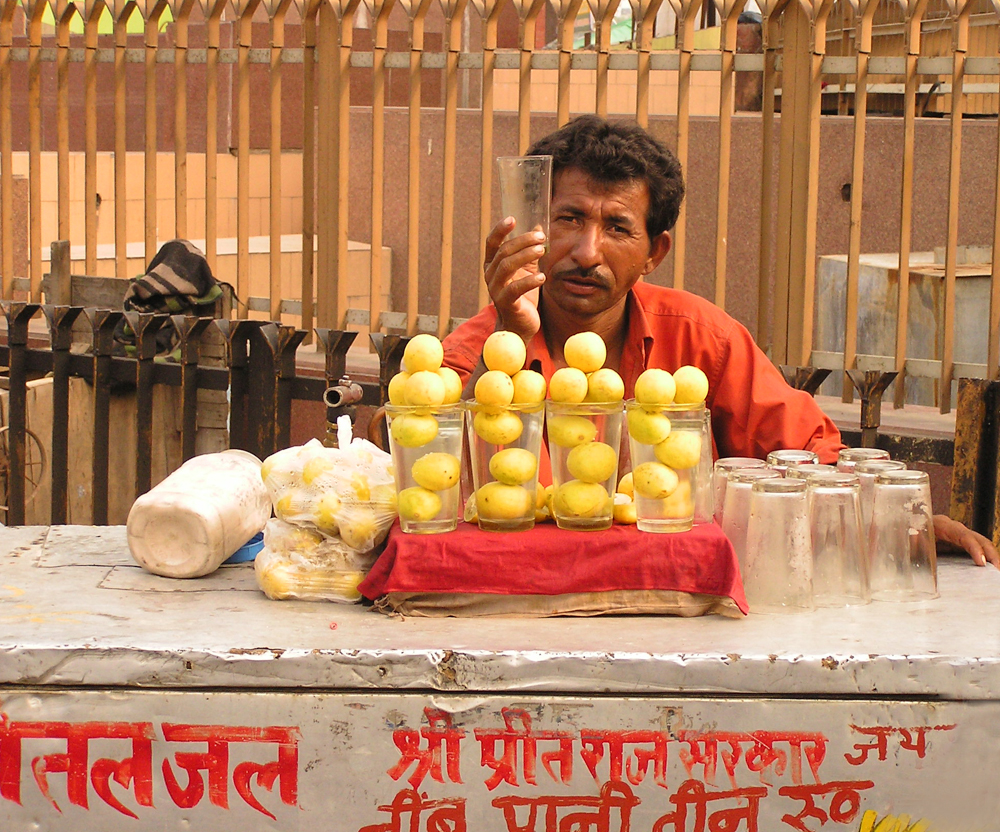 At the heart of it all, between the old and the new is the Old Delhi Railway Station, that you clearly saw in the satellite imagery: 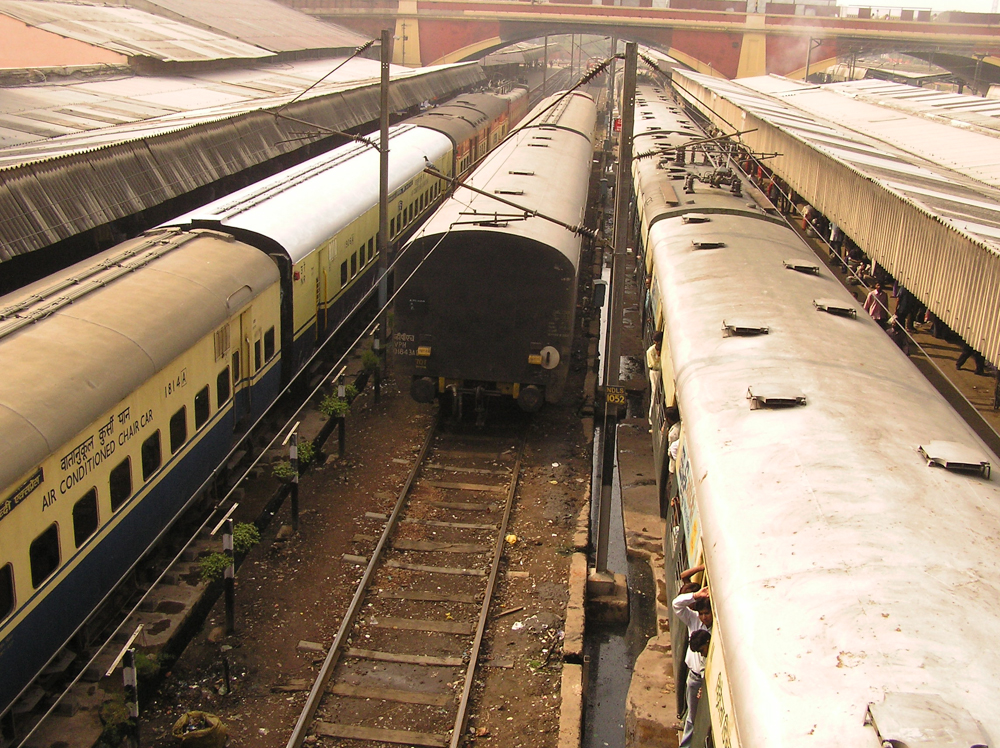 What few people know about are the local trains, which still run through the city, stolidly servicing the people while its flashier, underground counterpart gets all the press. Here, an old man looks out of the window on the local train on the way home. 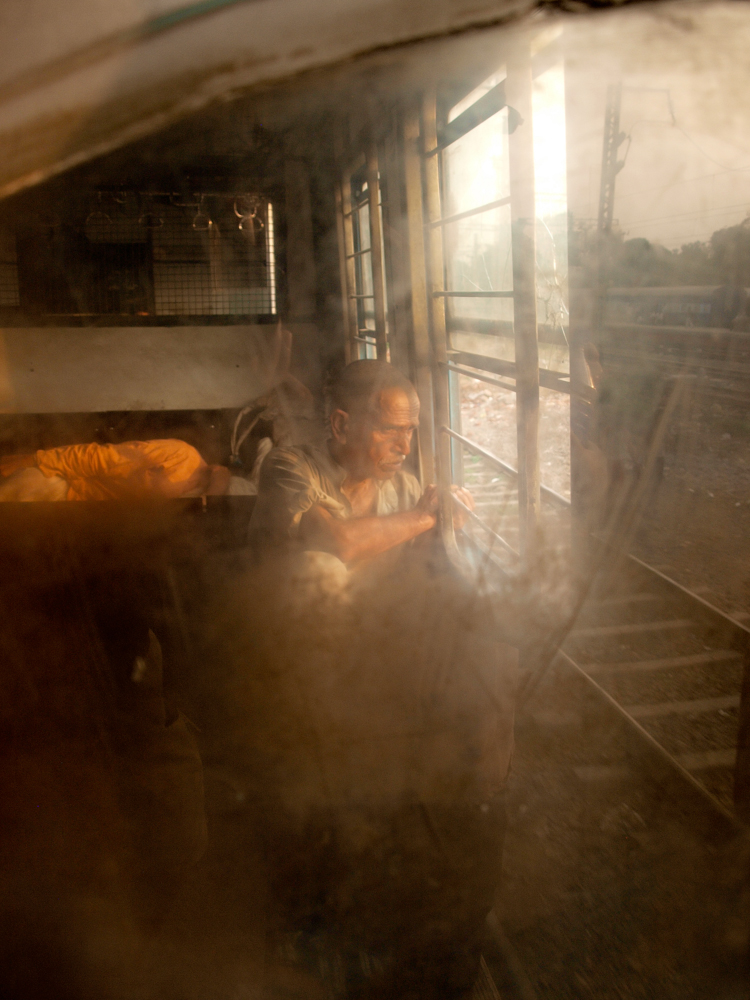 It is the old Delhi that fascinated me: an accidental turn off the main road, a misread sign leading you to to the wrong bus stop, and you were transported into another world. Here, emerging from the otherwise modern Chawri Bazar Metro station, one is confronted with a scene that has changed little in the last thousand years: the primary mode of transportation of bulk goods is still human carts, and the streets are dense melange of transportation conduit, living room, and industrial floor. 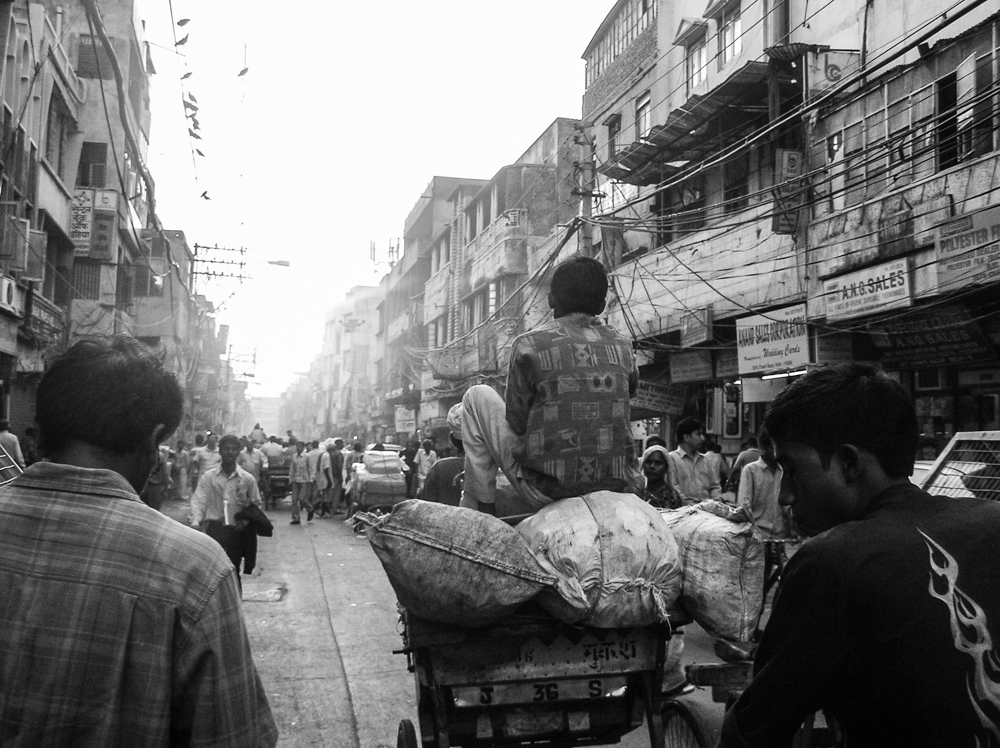 You can find all sorts of stuff here, in old Delhi, things that perhaps you can only find here. In Daryaganj, a bookseller hedges his bets: lurid posters of Arnold share compete with books on Pleistocene fossils and Corporate Accounting. 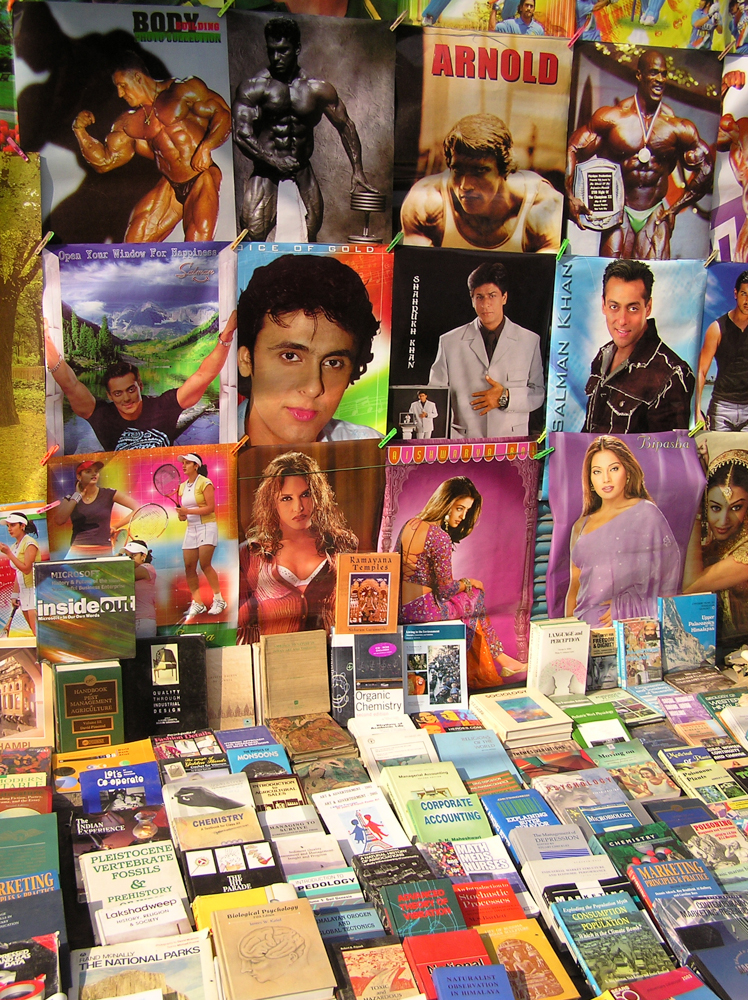 There's a shop that specialises in almost everything. Want some springs? Why not visit the Spring shop in Chandni Chowk? 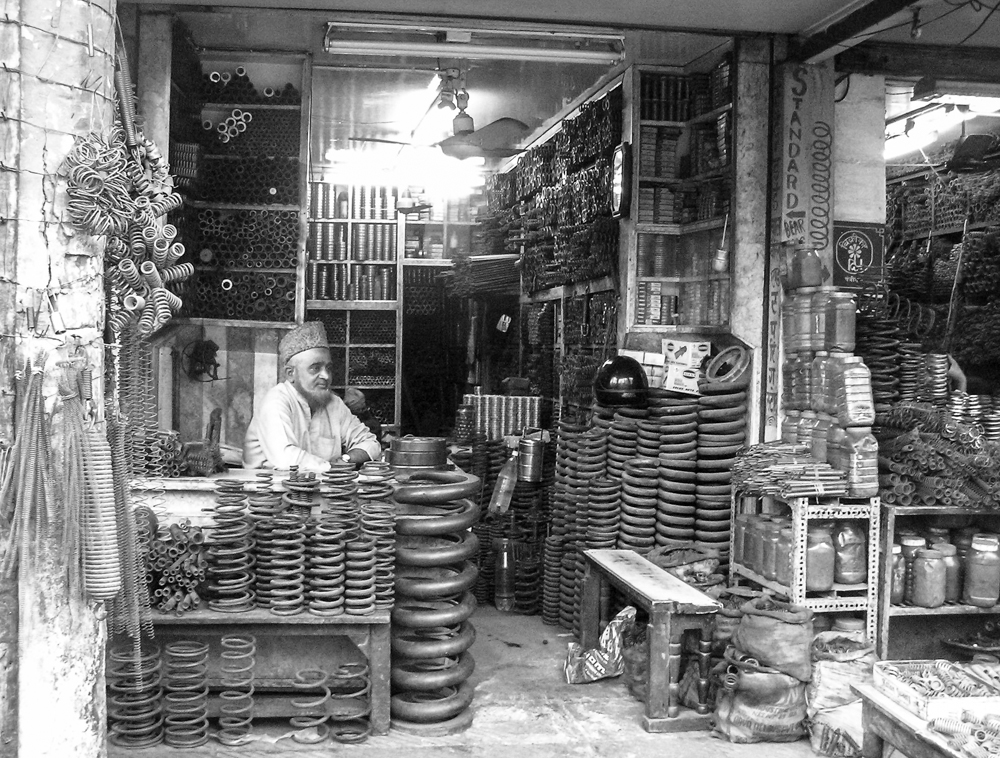 There are moments of quiet too, tucked away between the endless rush of the madding crowd. Here, an under-employed watchman enjoys a smoke in the early morning air near Kashmere Gate 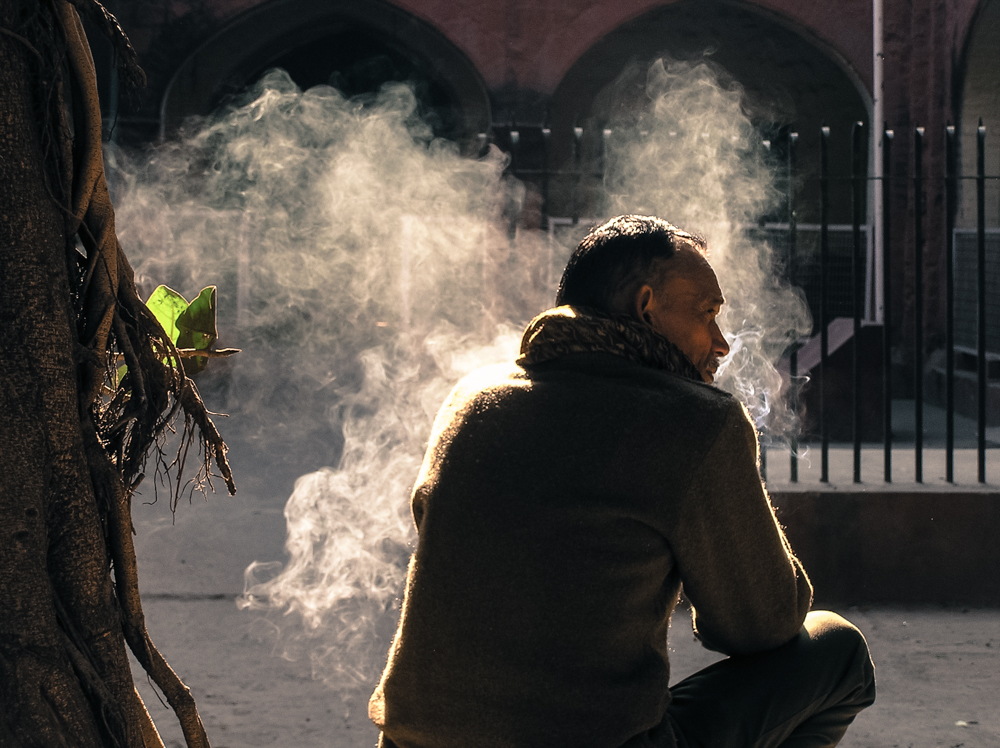 Old Delhi is the home for so many, and sometimes, the stark reality of how people are trapped here is sometimes all too obvious. This is a pedestrian over-bridge in Daryaganj, on a cold winter evening. 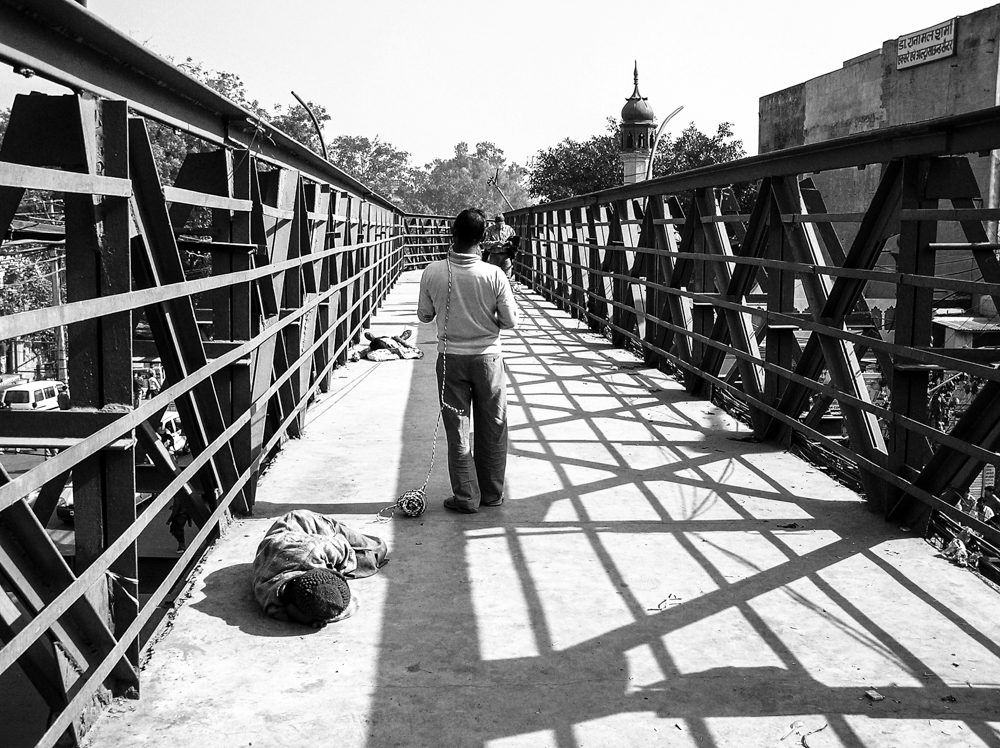 Looking down, one sees a tiny barber-shop, right next-door (so to speak) to a shoe-shop. 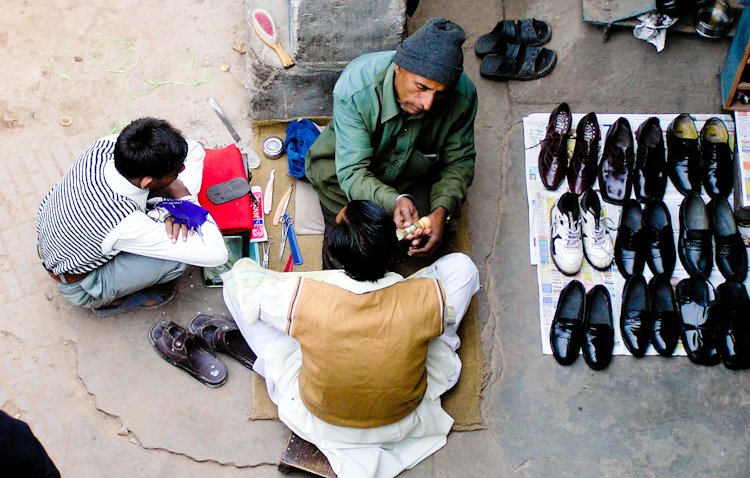 It is hard to remember that Delhi is the home to so many. In yet another nameless tenement, a group of Burmese refugees tries to make for themselves a new life. A mother of three is framed in her mirror in her house: 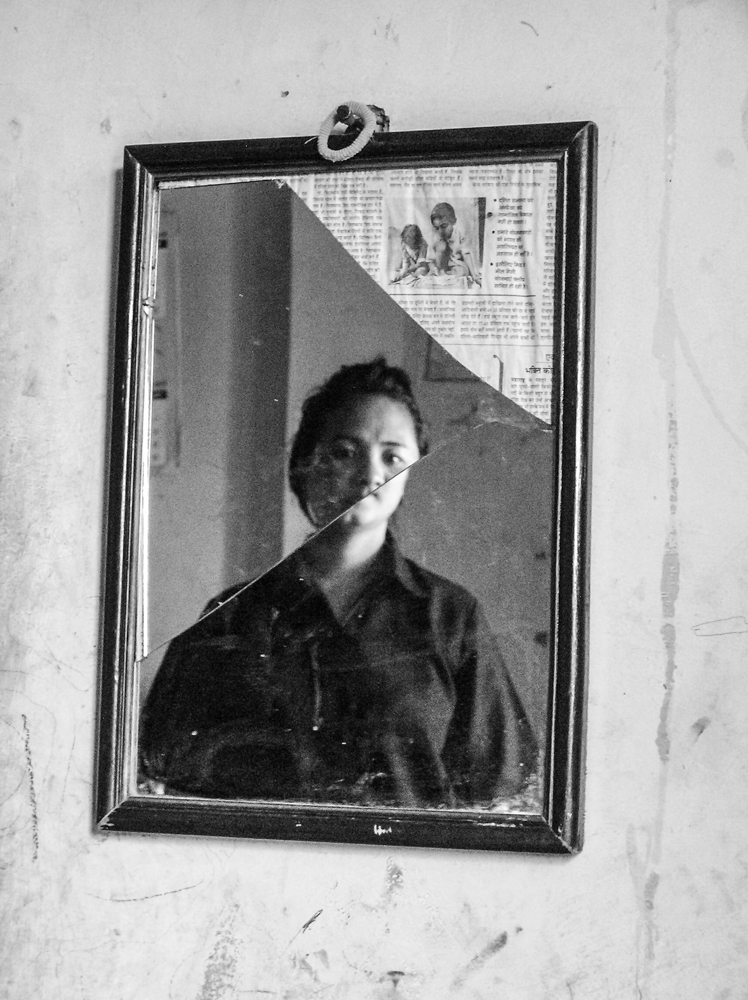 Back out of the streets, another man, with another life tends to his livelihood sharpening knives on an improvised contraption powered by his bicycle (which doubles as his getaway vehicle in case chivalrous policemen descend on him to extort from him their fair share). 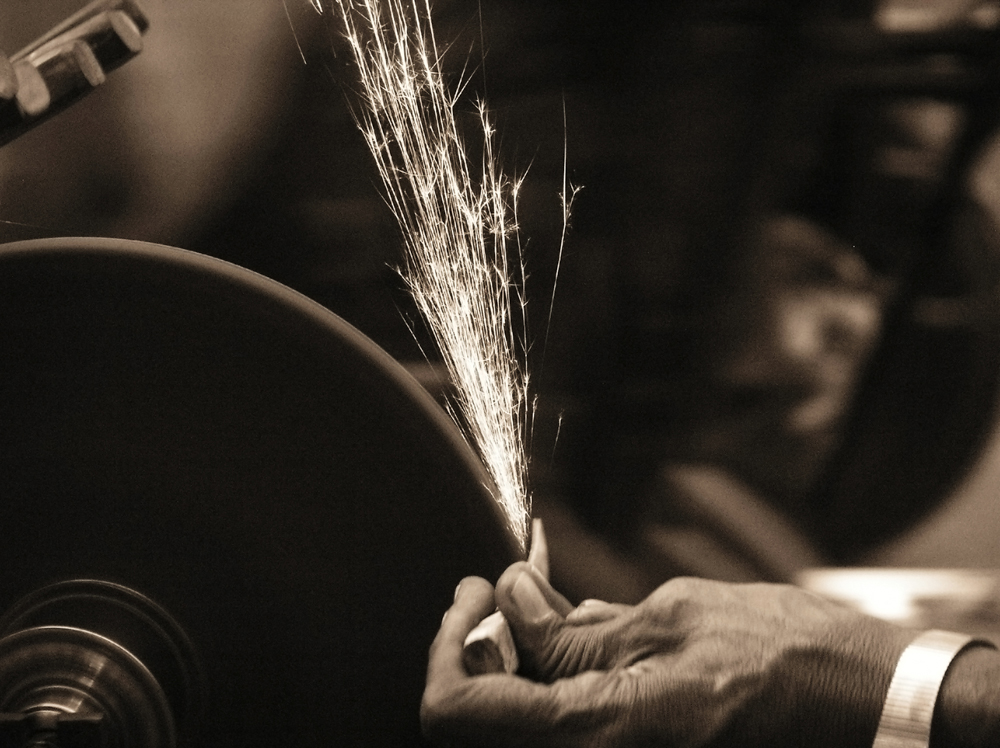 A map of old Delhi just before the Rebellion of 1857. The city was extensively destroyed, with British capitalists massacring thousands of civilians following the fall of the City.

Then there is the very old Delhi, the Delhi of forgotten kings and crumbling ruins. This is the Iron Pillar, a relic from two thousand years ago, framed by more recent ruins from more recent kings. 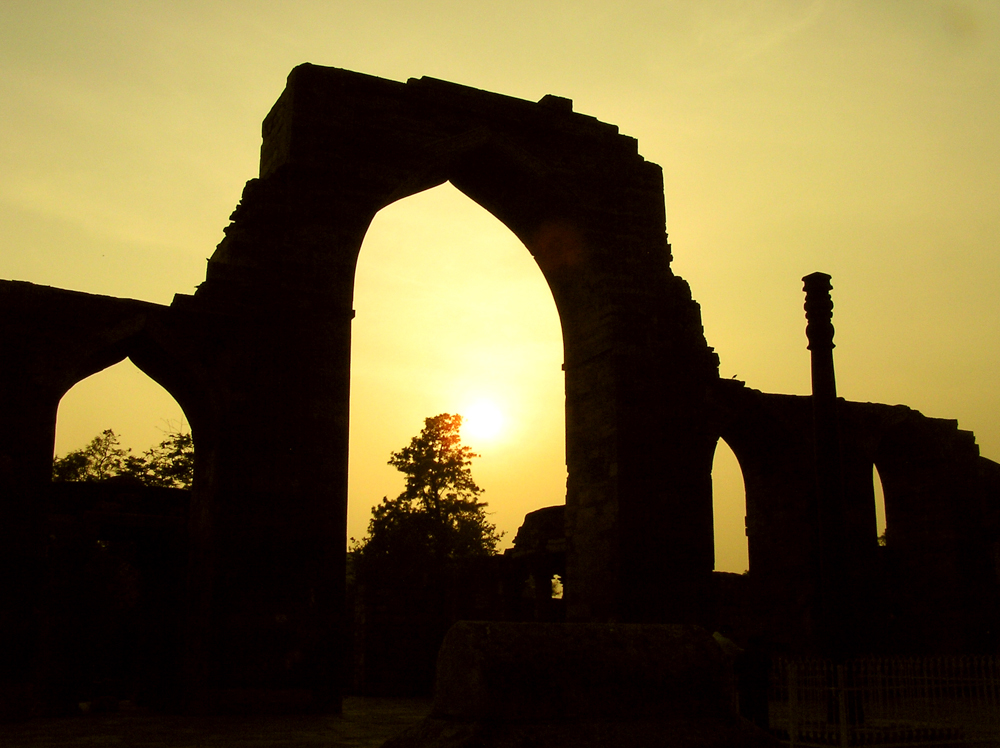 A different king, a different time, but also from the past: the tomb of Safdarjung. 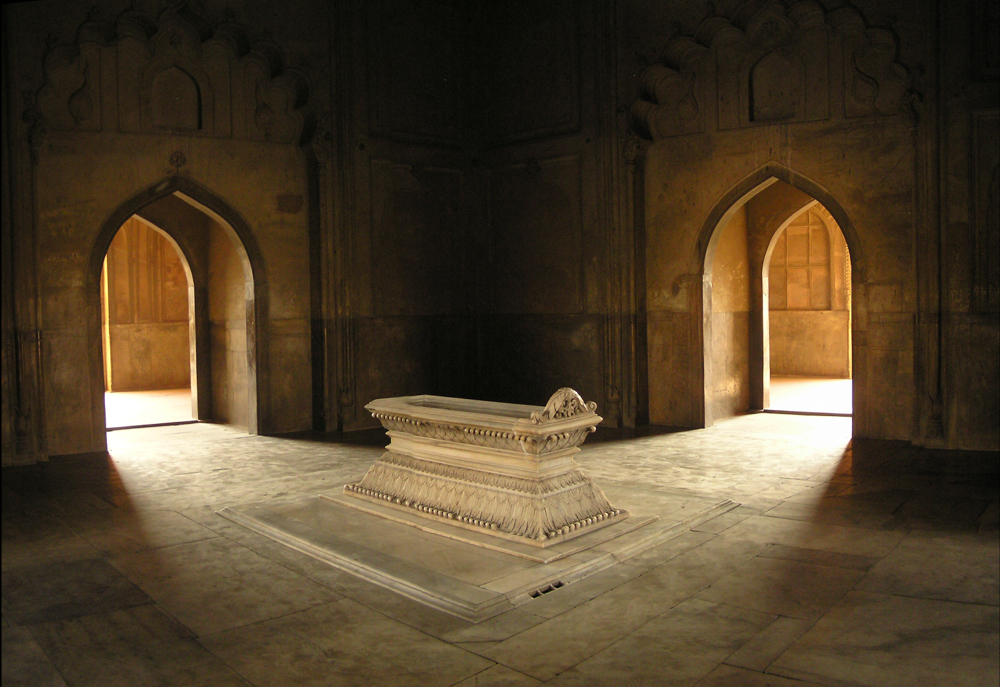 A brightly painted doorway harkens back to forgotten era when everything was different. 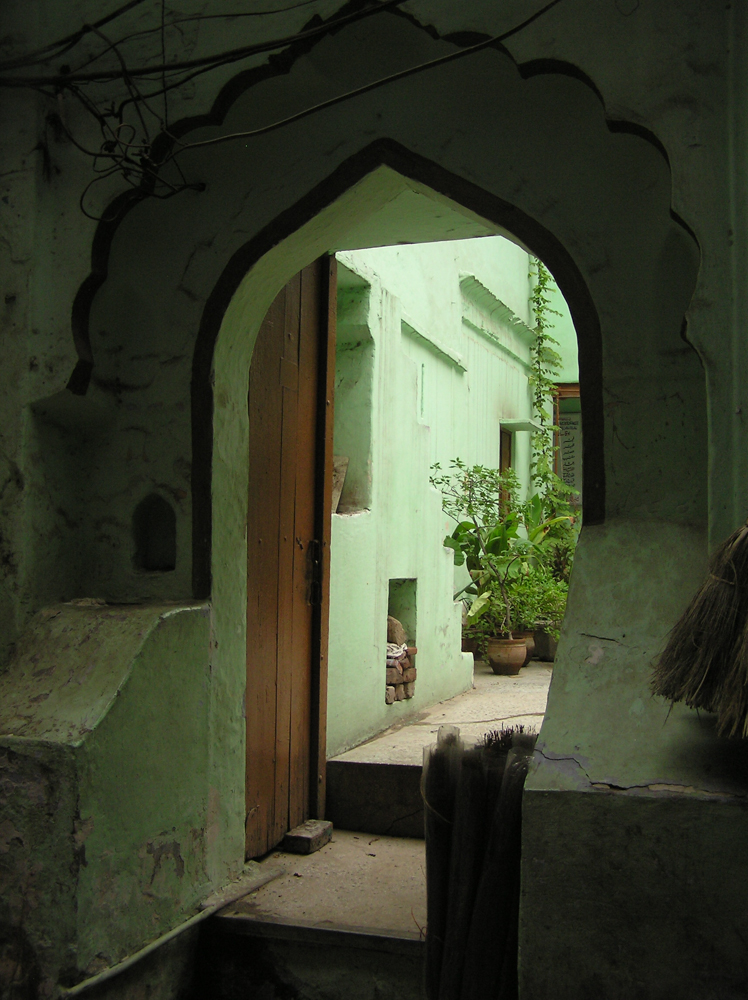 Another tomb, another king, another forgotten chapter in a history book: a schoolboy looks through a massive doorway at some long-dead man's mausoleum, wondering what his name was. 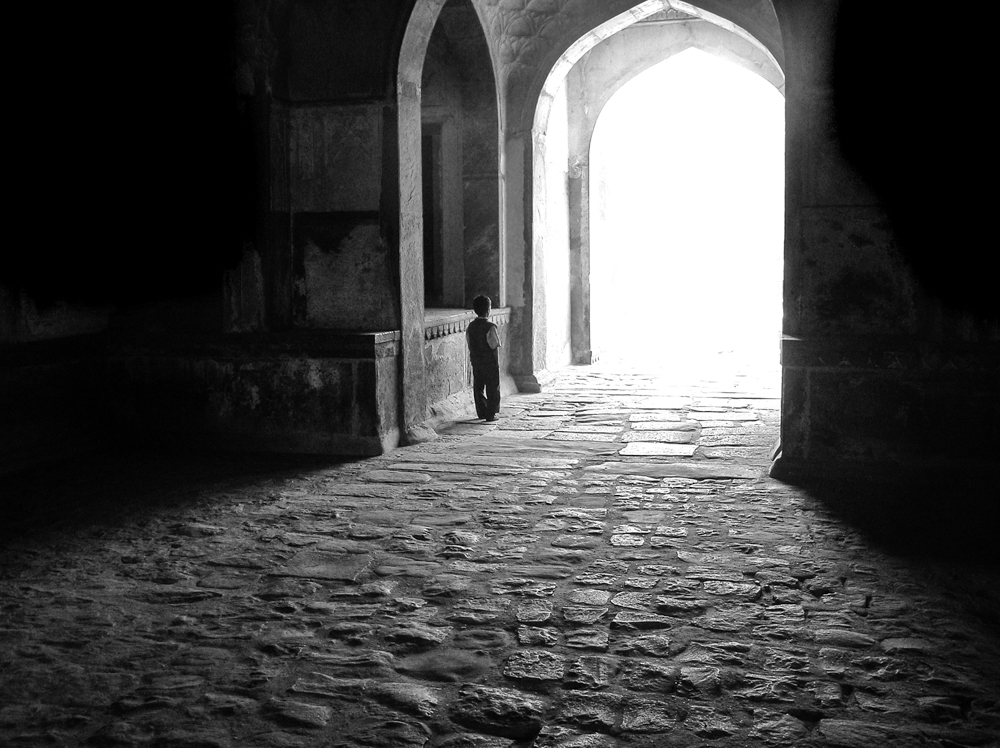